Furisode kimono Furisode kimono is a formal kimono with long length of sleeves. It is the most gorgeous kimono. Furisode are mainly worn for major social functions such as wedding ceremonies or tea ceremonies until they get married. Depending on the quality of the materials, design and workmanship, a furisode normally costs around A$15,000 for 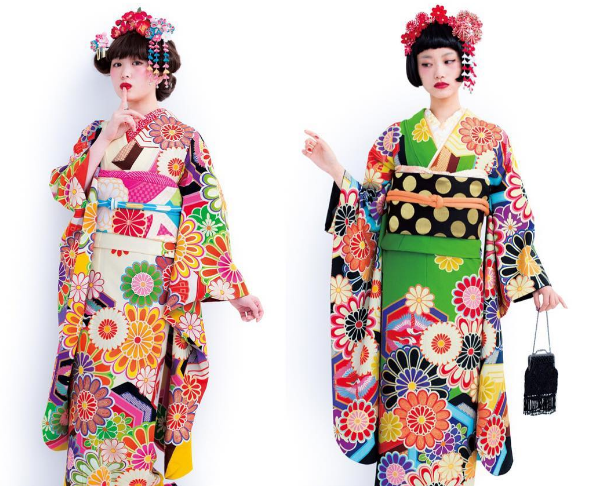 Furisode kimono is a formal kimono with long length of sleeves. It is the most gorgeous kimono. Furisode are mainly worn for major social functions such as wedding ceremonies or tea ceremonies until they get married. Depending on the quality of the materials, design and workmanship, a furisode normally costs around A$15,000 for the whole outfit. Many parents buy the Furisode for their daughters to celebrate this significant point in a young woman’s life. Furisode is a formal kimono for single women, it is brightly colored and made of very fine quality silk. In the very modest Japanese society wearing a Furisode kimono is a very obvious statement. It is a very loud and clear advertisement that the single woman is available for marriage. One of the major points of difference with the furisode kimono are the long sleeves. The sleeves go right to the ground. The second Monday in January is a public holiday called ‘Adult Day’ and many young women attend a ceremony wearing their Furisode kimono. It’s worn by young and unmarried women on formal parties or ceremonies, like marriage ceremonies, coming-of-age ceremonies or graduation ceremonies. It’s worn with luxurious Obi that has plenty of gold and silver thread. And the Obi is tied very intricate and deluxe. 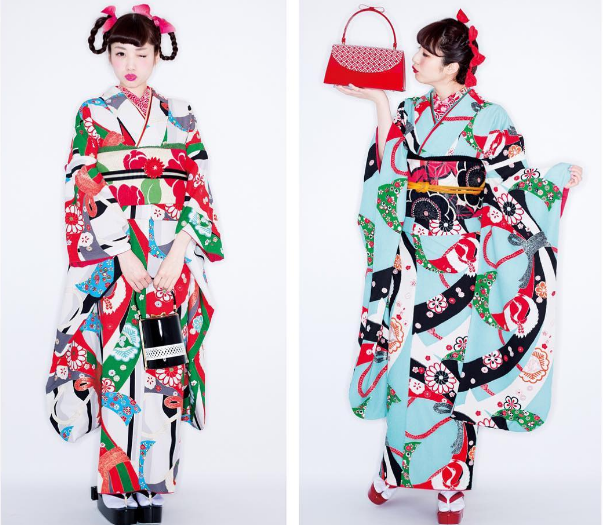 Furisode kimono is classified in length of sleeves. There are “Oh-Furisode (Big-Furisode)”, “Chu-Furisode (Medium-Furisode)” and “Ko-Furisode (Small-Furisode)”. Each Furisode have different length sleeves. (The sleeves length of basic kimono is around 49cm.) The formality of a Furisode is based on two key elements: the length of the sleeve, and the presence of mon. Any level of mon can be applied to a silk Furisode kimono, either one, three, or five. The various sleeves lengths are described below in greater detail. 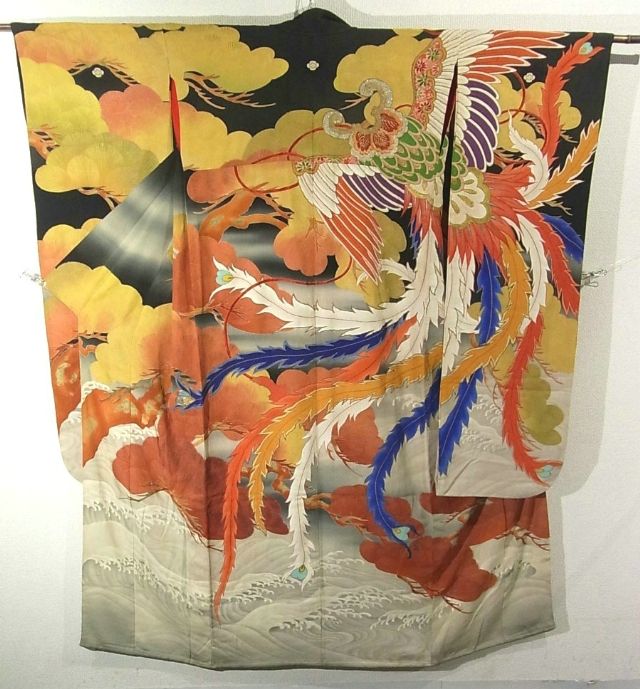 “Oh-Furisode” is called “Hon-Furisode” too. “Hon-Furisode” means “the most formal Furisode kimono“. It’s longest sleeves in kimono. It is having family crest, lined by same fabric of outer material, lined double and padded the skirt with cotton. It’s a little heavy to move with wearing it. Usually, it’s used in only wedding scene or ceremony. Also referred to as “Honfurisode” or “Kakeshita”, this is the longest sleeve length. The standard length is 115cm, though it may range from 114cm to 125cm. It is typically worn by dancers and singers, or by the bride at a wedding ceremony or reception. The hem is padded to give it extra weight so that it can be worn without an ohashori, and allowed to drag the ground (see also hikizuri). It is very heavy compared to other Furisode kimono and can be difficult to move in. 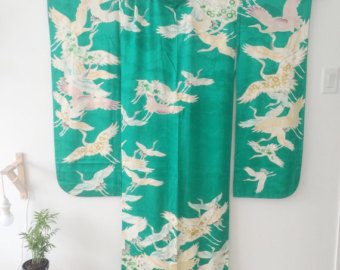 “Chu-Furisode” is very common now. Most of Furisode kimono sold in shops is “Chu-Furisode”. The length of sleeves are around 100cm (91-106cm). But recent years, with Japanese girl’s height is becoming higher, sleeves of “Chu-Furisode” is becoming longer. It’s as long as “Oh-Furisode”. This is the most common length of Furisode sleeve, that most Japanese girls would wear. Traditionally, the length of sleeve is around 100cm (ranging from 96cm to 106cm). Because recent generations of Japanese girls are growing taller, Chufurisode sleeves are becoming longer, and some are even made as long as Ofurisode. Unlike the Ofurisode, the hem of the Chufurisode is not padded, making it much lighter and easier to wear. Chufurisode is often worn for Coming-Of-Age ceremonies and for the first visit to a shrine after the New Year. 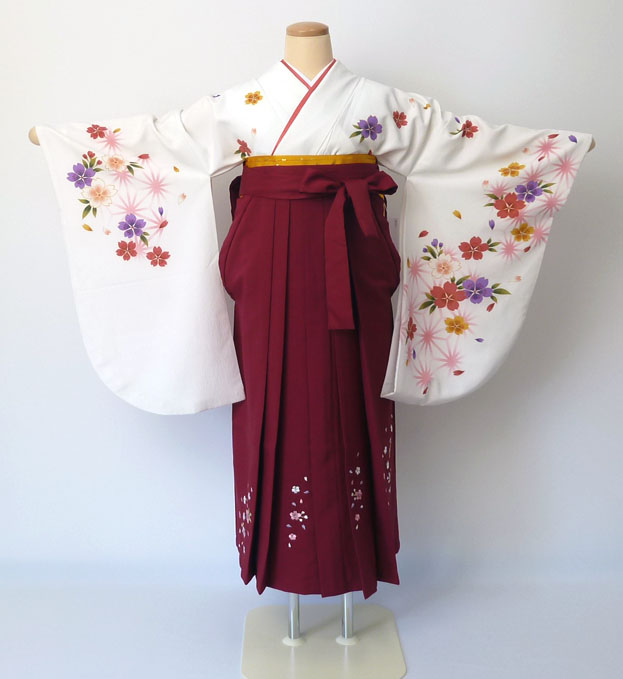 “Ko-Furisode” is not so common. But often, it’s worn with “Hakama (a long pleated skirt/pants worn over kimono)”. The length of sleeves are around 85cm (75-87cm). Moreover, there are “Kuro-Furisode (Black-Furisode)” and “Iro-Furisode (Color-Furisode)”. It’s depend on base color, and “Kuro-Furisode” is more formal. But, this rule is about to fade away. This is the shortest length of Furisode sleeve. Kofurisode are rather uncommon today, though some girls rent Kofurisode for their graduation ceremonies. Pairing Kofurisode  with hakama creates a classic look that resembles a Meiji Period schoolgirl. This style can be paired with tabi andgeta, or for a more retro look, can be worn with western-style lace-up “granny boots”. With boots, the hakama are usually worn shorter than with tabi and geta. A Kofurisode kimono with a Komon pattern and an informal material can even be considered a casual garment for young unmarried ladies. 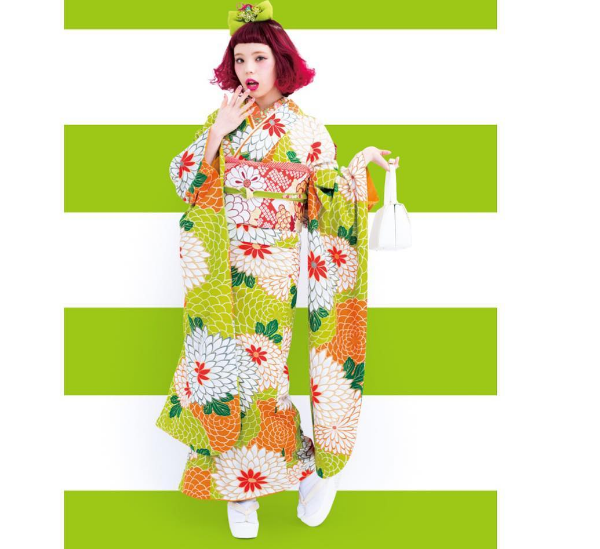 Today, Furisode kimono are considered very valuable, and most women would rather hold onto their Furisode to pass down in their family, rather than cut them. Few young Japanese women own Furisode today, but services for renting them are common. It can cost between ¥20,000 and ¥50,000 (roughly $250-$630) to rent a Furisode and all of its accessories, and around ¥100,000 (roughly $1270) to purchase.