The Geisha origin Geisha are part entertainer part artist and today fill a role as the icons of traditional Japan. They are artisans of music, art and conversation (for more information see the Arts section of this page). Trained from a young age they develop mastery of performing arts during their apprenticeship and career. Large 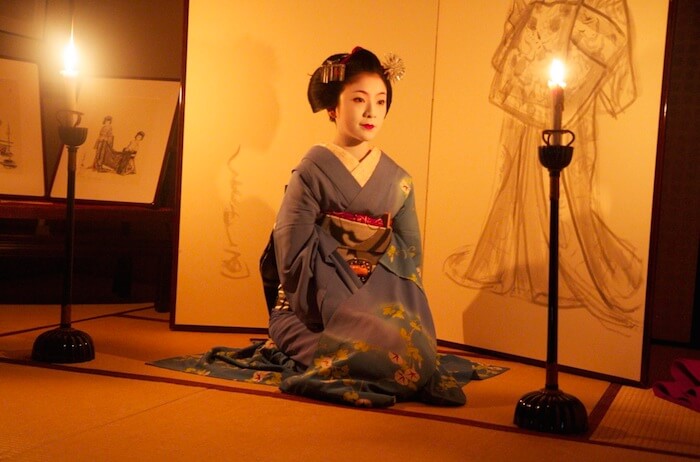 Geisha are part entertainer part artist and today fill a role as the icons of traditional Japan. They are artisans of music, art and conversation (for more information see the Arts section of this page). Trained from a young age they develop mastery of performing arts during their apprenticeship and career. Large amounts of time are devoted to learning the arts of the geisha, both throughout apprenticeship and into the professional period. Dance and music classes are grueling with years of practice required for performances.

During public dance season there may be large amounts of group practices required with other women from the hanamachi. Other classes may be undertaken such as learning games, learning the local dialect and conversational arts, makeup classes, kimono dressing or tea ceremony. By the time a geisha has graduated she will have spent 5 or 6 years in the study of traditional arts. Geikimonsha kimono is one of the defining characteristics of a geisha. Geisha wear kimono with a neckline that dips low on the back to show off the nap of the neck. That part of the neck is as sensual for Japanese men as the breast is to Western men. Geisha have a formal kimono (called de) that shows off the nap of her neck. This is the kimono that demands the elaborate hair styles and the white makeup. The kimono worn the rest of the time is similar to the traditional Japanese kimono. It may even be more subdued. Her underkimono shows at the collar, sleeves, and hem. Geisha Kimono is the largest expense of being a geisha. They are made from the best silk. 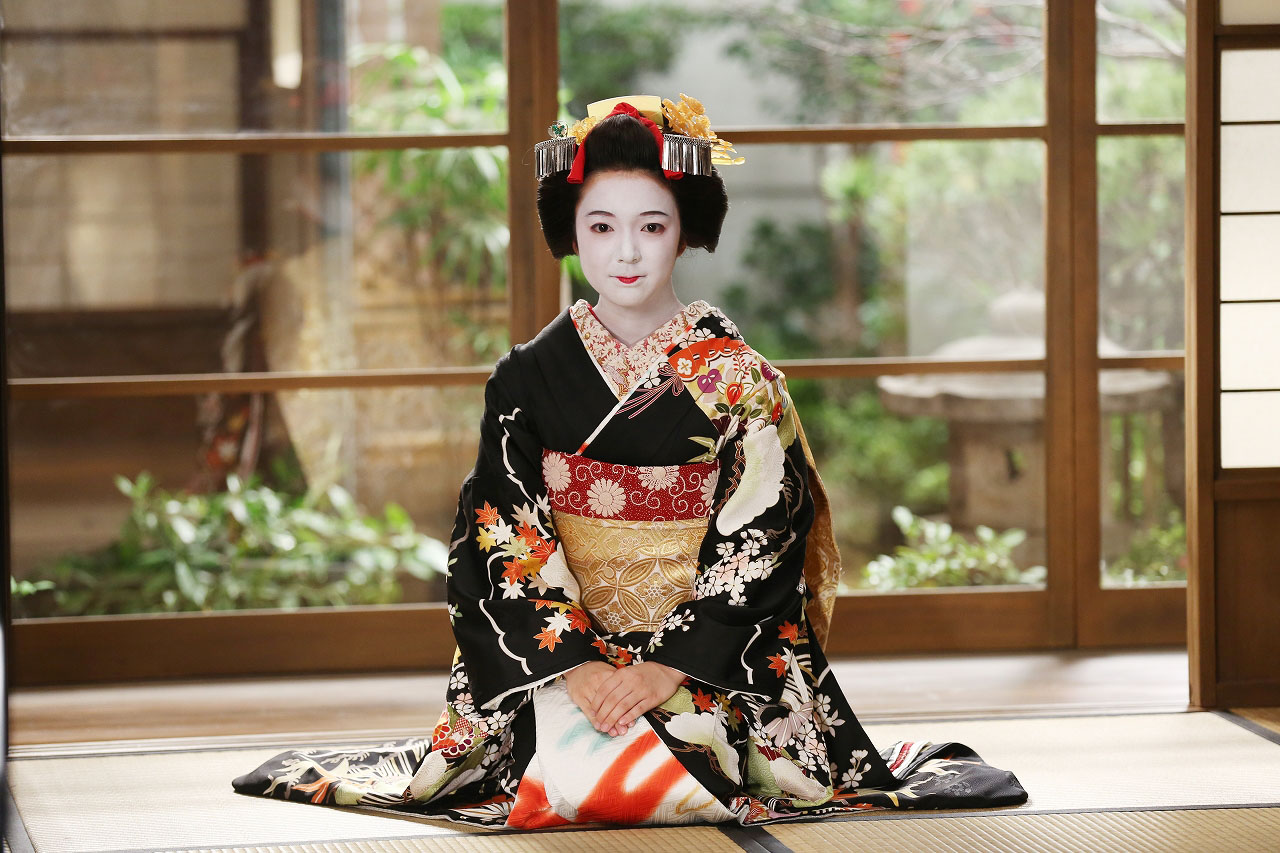 The kimono completes the geisha. After many months of training, a full-fledged geisha dons a very special geisha kimono to mark her official entry to this mysterious and beautiful world of the geisha. Just as a geisha’s make up evolves from the those of a maiko’s which is more defined, exaggerated and distinct, the kimono also changes as the girl progresses in her training to be a geisha. For those who are wondering what is under the layers of kimono, nothing at all. Geisha, apparently, don’t wear underwear. It disrupts the lines of the geisha kimono. The most intimate layers for the geisha are called hada-juban and the naga-juban. Apprentice geisha have the most elaborate kimono with long sleeves.

Geisha dress with asymmetry. Geisha show slightly more of her neck. The righthand side of the underkimono collar shows a little more in the front. The geisha kimono requires a different way of walking, according to Liza Dalby. Dalby is one of the few Westerners who have become geisha. She says that over time, geisha bodies become adapted to the kimono. Many told her that western skirts and belts were uncomfortable. The geisha kimono is prone to wear. Kneeling wears the front of the skirts, makeup mars the collar, and the hem is prone to catching dirt and fraying. Not to mention the sleeves (especially the apprentice kimono) can find themselves in food. This adds to the expense of owning kimono. 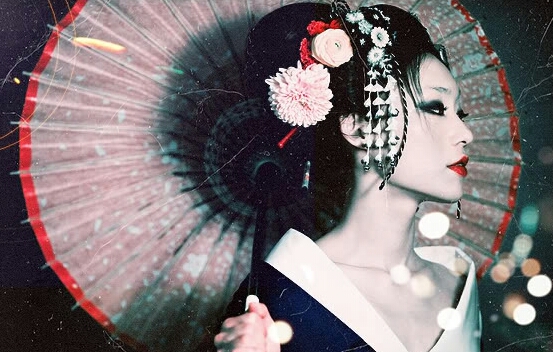 A geisha wears a different kimono. From the ornate and elaborate style of the maiko, the geisha’s kimono is less flamboyant. This is because the long training that the maiko has undergone has produced a woman whose beauty goes beyond the beautiful makeup, hairstyle and kimono. The geiko is a beautiful woman inside and out and she does not need the colors or style of what she wears to give this distinction. The geiko’s kimono is usually of a subtle, single color, with a print or pattern towards the bottom. The sleeves are shorter in length and are of a single color, too. The pattern of the kimono silk is usually based on nature, in accordance to the season. The obi is of single color and brocade material. It is narrower and tied in a smaller knot. The collar of the under robe is white, which signifies maturity. The most formal kimono that a geiko wears is a black kimono with crests of the okiya on the front and back of each sleeve and in the center of the back below the collar. 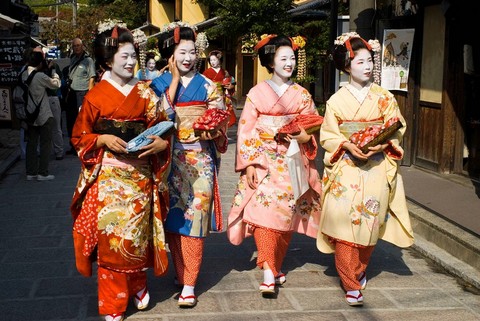 Of course, the geisha kimono is not complete with the obi. The obi is a long piece of silk tied around a geisha’s waist. It is worn lower than obi worn by other traditional Japanese women. Theobi helps hold the kimono closed and provides further elegance to a geisha’s lines. The obi also lends support for the back. Sitting on the floor, straight backed can be hard on the muscles without this stiff garment’s help. Obi can be as expensive as kimono and just as elaborate. The apprentice obi is longer than a full geisha. It has a large back knot. The apprentice obi is richly decorated and can be longer than 16.4 feet. A full geisha obi measures 13.14 feet long and is tied into the simpler box knot. The obi knot is always tied in the back by a professional dresser or another geisha. Front knots were a sign of prostitution. A prostitute couldn’t be bothered to tie elaborate, padded knots behind her back after every client.

The difference of geisha kimono

Geisha compared to Maiko are less flamboyant. The geiis usually of a subtle single colour with a design sweeping up from the hem, based on scenes of nature or traditional Japanese themes, in accordance with the seasons. Similarly the obi of the Geisha is more subtle and often a single colour brocade with minimalist obi belts and brooches. Day to day the hairstyle of the Geisha is a relatively simple bun, however intricate wigs are worn for formal occasions and dance recitals. Similarly for Maiko, the most formal attire of the Geisha is full white makeup with a “5 crest” (kuro tomesode) kimono, which is a black geisha kimono with crests (kamon of the owners family or Okiya) on the front and back of each sleeve and one in the centre of the back below the collar. Geisha wear white collars on their under geisha kimono which is a sign of maturity. Rather than the tall Okobo of the Maiko, Geisha wear flat lacquered Zohri, with or without Tabi (buttoned socks). The wearing of Zohri and Okobo without Tabi was a fashion started in the hey day of the Geisha world and is considered a very “iki” fashion. 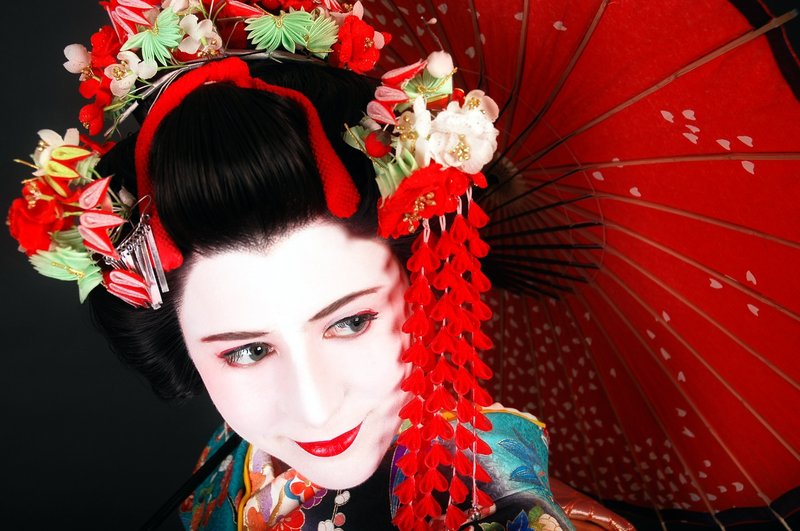 The women behind the kimono is what makes a geisha kimono special. The dance training and other movement training geisha undergo allows her to wear the kimono elegantly and professionally. The geisha’s kimono is no different from a business suit. It is a visual signal of her professionalism. Geisha are living embodiments of the Japanese arts. They help keep traditional dance, tea, music, and dress alive in our modern world. As time moves forward, Japan need to keep touch with the roots of their respective cultures and geisha is one of that.