Kimono accessories Kimonos are ancient Japanese robes, but they are still popular in Japan today. Women often wear them during festivals, weddings, and as casual clothing. Many people do not know that men wear kimonos too. There are also schools that teach girls how to wear a traditional kimono. Over the past few decades, though, 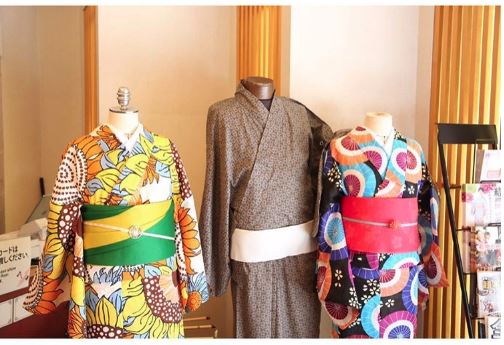 Kimonos are ancient Japanese robes, but they are still popular in Japan today. Women often wear them during festivals, weddings, and as casual clothing. Many people do not know that men wear kimonos too. There are also schools that teach girls how to wear a traditional kimono. Over the past few decades, though, fashion designers have put new twists on the kimono design with many kimono accessories to make your kimono more beautiful and attractive. 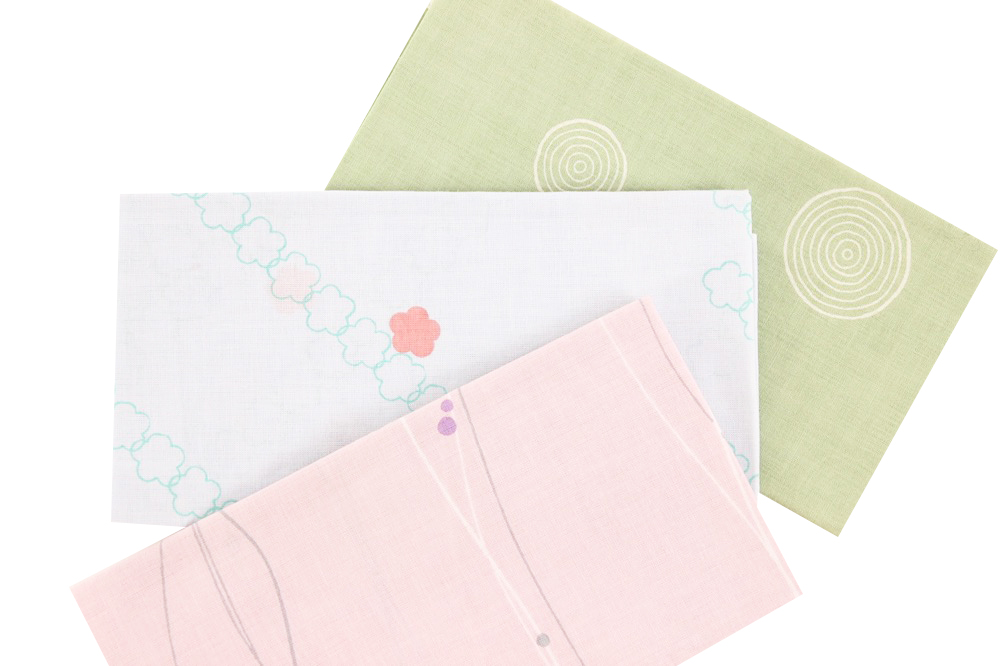 In other words, padding. This tends to get overlooked in some kimono dressing tutorials. The expected aesthetic of wearing kimono is producing a long, straight, tube like silhouette. Just look at all those professional kimono photos online! Look at how straight and smooth they are! Unfortunately, the female body has a tendency to be curvy in some spots and that just won’t do. While there are specific body padding products for the sole purpose of wearing a kimono available online, they aren’t that easily accessible to non-Japanese speakers just yet. Thankfully, there are easier ways to get around that. This kimono accessories was to help flatten the curve of the back and waist so the obi would lie straighter. It is also recommended for busty women to take a towel folded into a long strip and tie it under the bust. 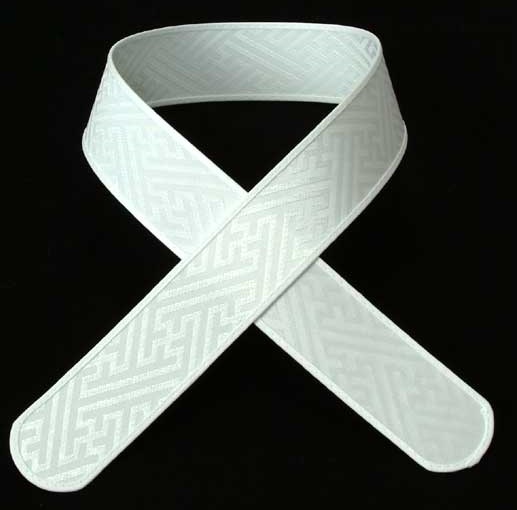 This kimono accessories is a strip of plastic inserted into the collar of the nagajuban. It’s required to create the perfect smooth, erect collar shape that is so essential for the kimono aesthetic. An eri-shin 衿芯 （えりしん） is a long, thin piece of plastic or cardboard that serves as a collar stiffener. It is threaded between the han-eri (half collar) and juban collar to create a nice, smooth, winkle free collar. It is important for all kimono styles… but is not required for wearing yukata (although – if you want, you can wear eri-shin with yukata). 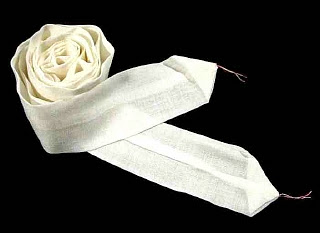 The another kimono accessories is ropes.You need many ropes to tie a kimono. I recommend you have at least seven; two for the juban, one for tying a towel around your waist, two for the kimono, and then two more for helping you tie the obi (which get removed later). You technically need only one for the juban to secure at the waist but I use the second one to tie above my bust to keep the collars from un-crossing.

Also recommend that you have one rope the same colour as the dominant colour of your kimono. This one should be used for the ohashori. The rope end won’t look so jarring if it happens to accidently peak out from under the fold. It’s pretty easy to head to a fabric store to get your own. Japanese koshimi are flat and long enough to wrap around twice for a secure fit. 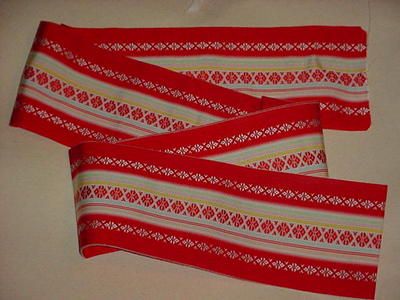 Date-jime is a tool for putting kimono on. It’s around 10cm in width. It’s tied on Juban and Kimono to keep neckband’s shape. These kimono accessories are wider belts for your kitsuke. They are used to firmly anchor the kimono and smooth out the torso for tying the obi. Often, kimono dressing videos show one datejime tied around the juban, and then another around the kimono. And this is over top the koshihimo. This is awfully daunting. This means you have a juban, a folded kimono, four ropes, and two datejime all under the obi. It’s kind of like wearing a corset. While it’s tempting to tie a kimono as tight and neat as possible, be careful or you will make yourself sick!! But anyways, there are two main types of datejime: The traditional style made with silk, or a more modern, elastic version with Velcro.

This kimono accessories is a firm, flexible board that is slipped in-between the layers of the obi at the front. This prevents the obi from being squished in when an obi-jime is tied around it and/or when the person bends over. Some versions come with ropes or belts attached. These are anchored to the torso before the obi is tied. Unless you have taken a super long fukuro obi and wrapped it around you three times, it’s noticeable when you don’t wear one. However, since it is hidden, it really can be anything that would do the trick. My kitsuke sensei recommended plastic weaving mesh (you know that stuff you use to make wool pictures?) available from craft stores, cut into shape and covered in a silky fabric. I’ve even seen Japanese woman stuff huge wads of newspaper into their yukata obi. As long as it looks good ladies! 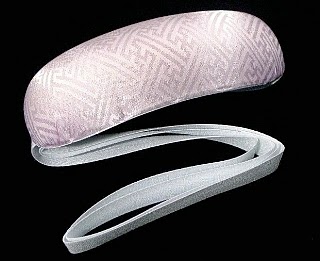 This object is used to put volume under the obi knot (musubi). It’s essential for placing the common Taiko knot high on the back. This kimono accessories is pretty easy to make by carving out the shape out of packing Styrofoam and then stuffing it in the middle of the cut off leg of an old stocking. It’s also pretty cheap to buy online too. I’ve also rolled up a towel tightly with an elastic band and hidden it in my obiage. 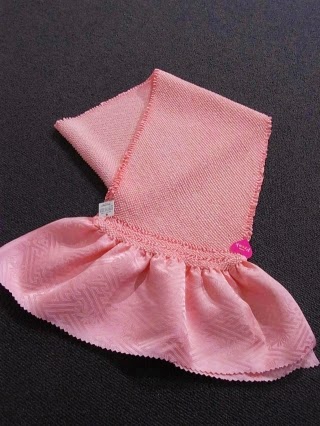 Obi-age is a kimono accessories, a silk sash that is used to hide the obi-makura. It is usually tied into a knot around the torso and tucked into the top of the obi, which a little bit showing. However, there are different styles of tucking it in and is often more visible with furisode kimonos. I found that lots of silky looking, colourful, long thin scarves can be found at thrift stores and work perfectly as an obiage. I personally have a bunch of authentic and “western scarf” obiage in my collection to help create different looks. 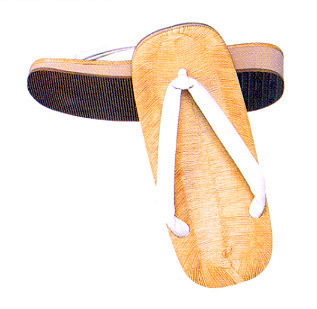 Zōri are flat and thonged Japanese sandals made of rice straw or other plant fibers, cloth, lacquered wood, leather, rubber, or—increasingly—synthetic materials. While wearing western shoes has become trendy with modern kimono wearing, bare in mind that taking shoes on and off while in kimono is very difficult. Zouri is one of the kimono accessories and can be slipped on and off without having to bend over. If you want to have the authentic Japanese kimono look, then get a nice pair of zouri. 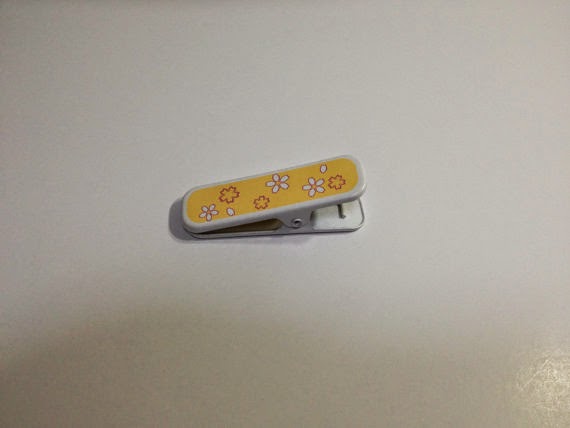 Unless you are an experienced kimono wearer, it is highly recommended that some sort of clip is used in the process of dressing. Above is a Japanese product directly marketed for that purpose. It has a lot of tension and a soft rubber layer inside. Recommended having two. One is used to clip the collars at the back to prevent the centers from slipping, and another is used to help with tying the obi, such as clipping the loose end to your body so it doesn’t fall down before you need to move it. It’s also useful in preventing the layers of obi around your waist from loosening before you get the chance to secure it with an obi-makura. If you look through kitchen stores, you can find alternative clips such as the ones used to clip bags together. They have a little less tension then Japanese kimono clips just so you know. 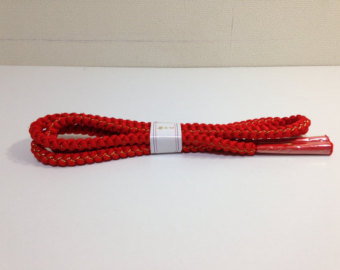 Korin Belt is a tool for putting kimono on. It’s a convenient substitute of Koshi-himo that is tied to keep neckband’s shape. It’s used by women only. It’s made with rubber and can adjust length.This useful adjustable, elastic belt has two firm clips on the end. Each clip is attached to a collar and then tightened around the torso to pull the kimono collars across one another. It can be used in lieu of a koshihimo. Its usefulness varies from person to person depending on their body type, since some body curves tend to allow the collars to slip out of place easier. I use it on my juban since the collar has to be crossed tighter than the kimono. 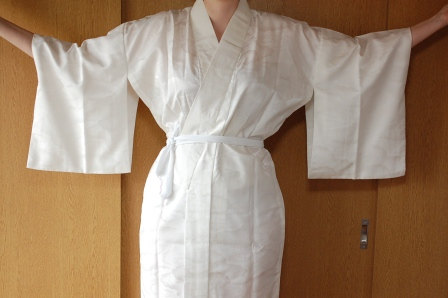 And the last thing of kimono accessories is Nagajuban (長襦袢) A nagajuban is worn beneath the kimono. This is another kimono, usually shorter than the outer one, worn as underwear, complete with the long kimono sleeves, which are neatly fitted inside the outer kimono’s sleeves. Silk kimono are difficult to clean and often delicate, the nagajuban (sometimes just called a juban) helps keep the outer kimono clean by keeping it off the wearer’s skin. Only the collar edge of the nagajuban shows from beneath the outer kimono. Many nagajuban have removable collars, to allow them to be changed and easily washed, without washing the entire garment. Nagajuban are often as beautifully ornate and patterned as the outer kimono. They are considered ‘hidden smartness.’ Men’s kimono are usually subdued in pattern and color, but the man’s nagajuban allows him to discreetly wear a garment with very striking designs and colors. Men’s nagajuban sometimes have designs referring to samurai, such as samurai helmets, dragons, scenery (especially Mount Fuji scenes), auspicious animals, or text on them.